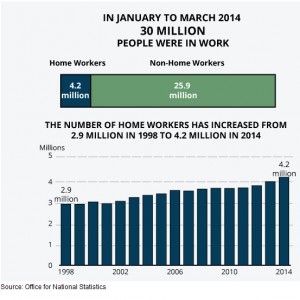 Latest Government stats on home working from the Labour Force Survey , published June 2014, show that 4.2 million UK workers are now home based, that’s just short of 14% of those in work.  The Office for National Statistics (ONS) started  collecting the figures on homeworking back in 1998 and since then there’s been an increase from 11.1% to 13.9% of the working population who are classed as home workers.

Also amongst the most recent findings are that:

Overall two-thirds of home-workers are men, one-third women. However if we compare the figures for those who work primarily at home vs those who just have home as their base the proportions differ significantly. For those who carry out their work at home the split is around half and half  male to female, whereas those who see their customers elsewhere are much more likely to be male.

Of those who work entirely within their home and grounds, the most popular jobs for men and women are:

For those who use home as a base but see their customers elsewhere the most popular jobs are:

This site uses Akismet to reduce spam. Learn how your comment data is processed.

Hello and welcome to BetterWorkingAtHome! My name's Jo and at the time of writing I've been working from home for about 20 years. Sometimes that was as a home based employee, sometimes as a … END_OF_DOCUMENT_TOKEN_TO_BE_REPLACED

Latest Home Based Jobs
jobs by

For loads of ideas for a practical and inspiring home office, studio or work space, take a look at the latest additions to my Work at Home Pin Boards.

Finding interesting and not too expensive home office furniture can be tricky. Check out the latest auctions, where you might just find some … END_OF_DOCUMENT_TOKEN_TO_BE_REPLACED

My site runs on the Genesis Framework by StudioPress:

I use a customised version of the Innovative Theme